from contacts of previous cases through high school graduates to 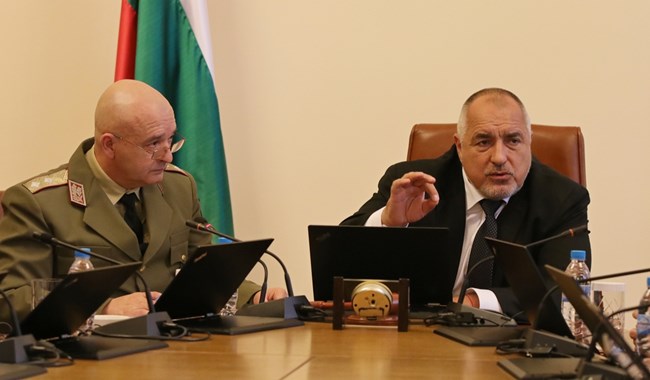 Boyko Borissov talks to the headquarters every day, but besides his boss, Gen. Ventsislav Mutafchiiski, has already listened to the infectious disease specialist Assoc. Prof. Atanas Mangarov.

family outbreaks that are not interconnected

heart patients with symptoms of coronavirus

The proms held, the opening of the discos and the slow decline of the clusters are the most probable reasons for the peak of Bulgarians newly infected with coronavirus. And the consequences of the football matches, where thousands shouted at each other and hugged, we expect in days, experts commented.

“I think there is a peak of infected young people,” said the head of “Pirogov” Prof. Asen Baltov. Most of them have been to discos, balls and gyms, he warned. The number of those in need of antibiotic treatment in the hospital also increased. Heavy exercise and exercise lead to faster entry of the virus into the lungs, explained Prof. Baltov.

This Sunday, with 180 cases reported in 2,591 tests (as of 0 a.m. on July 5), was another 24-day day with grim records. According to data from yesterday on the national information portal, 5677 people have been infected in Bulgaria since the beginning of the epidemic. Sofia has 58 new ones, on Friday there were 69.

In the capital, the infection is already spreading diffusely, according to the RHI and headquarters. The opening of the indoor restaurants as well as the stadiums was hasty, Prof. Kantardzhiev stated and concluded: “Things were missed for religious, sports reasons and discos.” For religious reasons, he is referring to the reported beginning of the second peak, which virologists attributed to Ramadan gatherings.

Proms are the proven reason for the anti-record for the day in Veliko Tarnovo – 16 new cases. The RHI announced on Sunday that 15 of the 16 infected in the last 24 hours

from the graduation party on June 27. More than 30 people became infected after the balls – young people and teachers from the American College “Arcus” and Sofia University “Emilian Stanev”, who celebrated together.

The euphoria from the royal sending of the 2020 alumni to Tsarevets was cooled on June 30, when it became clear that an 18-year-old young man from Byala, a graduate of the elite college, was in hospital a day after crossing the red carpet. A feverish search for all the contacts began. There were 125 people, 37 of them in the front row. All were examined step by step with a PCR test. The worst-case scenario has developed – since Thursday, confirmed cases have been steadily rising. First it became clear that among them is our best swimmer Anthony Ivanov, cavalier to his girlfriend Gabriela – a graduate of “Arcus”. Then it became clear that the director of the private high school was also positive. Last night it became clear that 25 out of a total of 42 Arcus students were present and their relatives were infected, more than 140 people were quarantined. And

the one from Tarnovo

as his son is among the 28 high school seniors from American College. “The mayor has a negative test. The municipal building is disinfected and working. The mayor has isolated himself. He is a responsible person and in no way would endanger the health of the employees of the municipal administration and the citizens “, announced the regional governor Lyubomira Popova. Panov did not contact his subordinates after the ball, so they are not under quarantine.

The head of RHI Dr. Evgenia Nedeva clarified that there is no cluster distribution in the region, but it is diffuse, although the balls turned out to be a hearth. Out of a total of 84 diagnosed in the district, 29 have already been cured, 44 are in home treatment, 7 in hospital. 4 of them died.

In Plovdiv, however, there are no newly infected high school graduates or medical personnel from the new 11. Most are from the close circle of already infected, announced the regional governor Dani Kanazireva. There is a “queue” from the evangelical meeting in Perushtitsa on June 6, after which 3 pastors died and the Roma neighborhood was blocked – close to one of the men is also with COVID.

In the neighboring Pazardzhik region the new 9 cases are all

One is a personal doctor from Pazardzhik, he is in home isolation. All newly infected people most likely came into contact with carriers of the virus without understanding, say the local headquarters.

In Varna, among the new 16 cases, there are several families. Most of them have nothing in common, explained for “24 hours” by RHI. All have mild symptoms and home treatment. In recent days, the age limit of those infected in Varna has been falling, and some of them are said to have

Two of the latest cases are just that. Experts expect the number to continue to grow. In June, the city was one of the zones in our country with 0 infected, which lasted a month and a half, but the cases became 144. And on Sunday Varna holds the second place after Sofia.

The thesis about the spread of the virus in nightclubs is supported by current statistics – gradually the coronavirus in our country is “rejuvenating”. According to the unified information portal as of July 5

This indicates that the virus is spreading among the most active group of the population, and collectively that of those under 40 is already chasing that of people around 50 and over.

It is worrying that some patients call an ambulance, saying that they have heart problems, blood problems, chest pain, and when the team responds unsafely, they face the symptoms of coronavirus – fever, chills, said the spokesperson of the capital’s Emergency Department Katya Sungarska. And he called on people to be precise and not to endanger medics, who in turn become contagious.

In the Pleven region, things are calming down after Bukovlak flared up earlier. As of Thursday, only 8 are new cases, 2 of them for the last 24 hours. A man returned from Norway, and a woman actually lived in Sofia, and both Pleven residents were tested at sea, said the head of the city’s health inspection, Atanas Garev. There are no new infected in Bukovlak.

In recent days, the cases in the area have been the contact of workers from the auto parts factory. There are 13 infected people in the village of Chepintsi in Rudozem, from where workers traveled by bus to the Hronovski plant in Smolyan. In Madan, in addition to people from the outbreak factory, a nurse from the local hospital is among those infected.

In “Hronovski” the mass screening showed over 100 people with coronavirus. According to the Smolyan RHI, the reason for the outbreak of the infection is that the first infected people continued to go to work. The outbreak in Dospat in a factory for the production of toys arose in a similar way. More than 100 people with COVUD-19 were also found in the municipality. With 342 cases since the beginning of the epidemic, the area is among the “leaders” in the country in terms of infected per capita. (24 hours)

Borisov: We will not close again

the state – no order is needed,

to hold everyone accountable

The Prime Minister admitted that he was already listening to Assoc. Prof. Mangarov.

And if it depends on the headquarters, everything stops today

“As nasty as this disease is, we will not close July and August. I listen to Mutafchiiski, but also Mangarov. I believe that no matter how difficult it is, we are strengthening hospitals, giving money for paths, we are going through this in a controlled and careful way. I gather headquarters every day. The more healed, the better. The traffic was deadly today, people want to rest. ” This was stated by Prime Minister Boyko Borissov when asked by journalists in Pomorie whether the state will take stricter measures due to the increased cases of coronavirus in our country.

According to the Prime Minister, every citizen must comply with anti-epidemic measures, for which there is no need to issue an order to close anything.

“If I ask the headquarters, they will offer me to close everything today. Beware, do not huddle, keep your distance, disinfect, we must live. Why do you want an order, “said the prime minister. “It is the opposition’s job to be dissatisfied, and it is important for us that business life continues to work,” the prime minister added.

Normal life at the earliest in

February, according to a Russian minister

The WHO announced a record number of new coronavirus infections in one day in the world – over 212,000. Most of them are in the United States, Brazil and India. More than 11.3 million cases have been confirmed worldwide and more than 530,000 have died.

A state of emergency has been declared in a number of cities in Serbia due to COVID-19. The coronavirus does not weaken and does not choose age, local doctors say. 325 new cases have been reported in Serbia, and eight have died. There have been more than 1,000 new infections in Turkey in the last 24 hours.

Authorities in Israel have quarantined 30,000 people after a mobile tracking application was activated. More than a thousand newly infected people are registered in the country every day, and the authorities are returning some of the restrictive measures.

Pubs, hotels, cinemas and museums reopened in the UK on Saturday. You have to go eat at a restaurant to protect the jobs of a whole generation marked by the coronavirus, invited his compatriots Finance Minister Rishi Sunak.

The Louvre opened in Paris, but Air France said it was cutting 7,500 jobs.

In Germany, Chancellor Angela Merkel thanked the elderly for their resilience during the coronavirus pandemic.

Mexico is ahead of Italy and France in the number of deaths from the new coronavirus and now ranks fifth in the world in this respect.

Life will return to normal next February at the earliest, Russian Health Minister Mikhail Murashko predicted in an interview with Interfax. In Russia, some restrictions remain in place, such as the ban on international flights, which was extended until August.

Meanwhile, it turned out that Bulgarian sailors had infected an entire ship with COVID-19, thinking that it did not exist. A Bulgarian businessman, owner of a shipping agency, told on Facebook about the two sailors that they spent 2 hours in an Indian city and after 3 weeks the ship found itself in South Africa with six infected and the two carriers – seriously ill.

“The entire crew is quarantined for 15 days on the ship with police in front of the cabins, the insurer provides an effective cash guarantee of $ 300,000 per person, and we find ourselves unable to sail after the quarantine because crew changes are prohibited in South Africa,” he wrote. he. (24 hours)

Defense Minister: the Russian operation in Syria was prepared with maximum secrecy

Sanliurfa Governor Erin: We have to explain that our number of...

Music quieter! Berliner shoots at group of people during excursion

Screening of acrobats at altitudes of 3,000 meters in the Alps

The end of sport in Slovakia. The new measures will...

Bulgargaz wants to increase the price of natural gas by over...

Common Symptoms of Covid-19 in Children