The first years of Romanian football were dominated by two cousins ​​- Ion and Gheorghe Becali. Or as the two change their names to look like Italian – Giovanni and Gigi. Part of their blood is Macedonian. Their family name comes from the so-called aromas who lived in northern Macedonia and Greece before moving to Constanta. That’s where their business started, which started with ships. Their first deals were with the army, and according to the media, they were quite dubious.

The families of the two were evicted several times by the communist regime because they had ties to a fascist organization in the past.

The two are friends with all the players from the golden generation of our northern neighbors. They advertise their goods, go to their clubs. 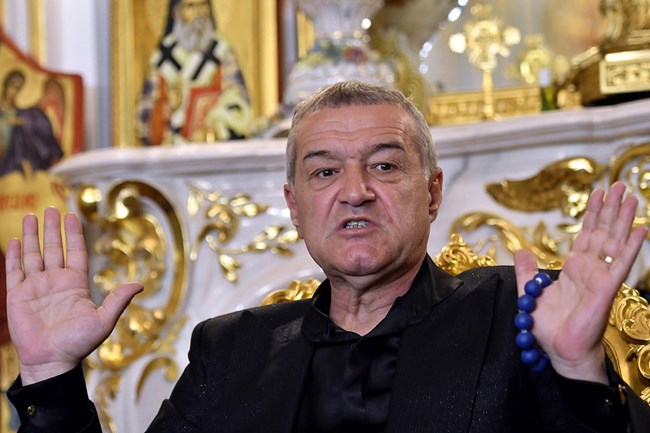 Gigi Becali was even an MEP at one point.

Giovanni is almost certainly the owner of Vasil Bozhkov in Dubai, where he has long had business interests. On the other hand, Gigi has nothing in the Arab world because he generally doesn’t like it. He is deeply religious and does not like to travel to this part of the world.

Ion and Gheorghe don’t have much respect for each other, only connected by the fact that they received tax evasion sentences and were football executives.

Undoubtedly the most famous is Gigi. He has owned the Steaua Grand for years, but failed to fight for the club’s name from the military and had to become the FCSB.

According to Romanians, Gigi just wants to be a normal businessman, while his cousin prefers the scam.

Giovanni’s story is deeply connected with Bulgaria. During Ceausescu’s time, he crossed Sofia and played illegal barbut. It is known to all of the old generation of gamblers.

This passion of his even took him to the Central Sofia Prison after he fell into the hands of the militia. He then went through Pazardzhik Prison to complete his sentence.

From those years is his close friendship with Vasil Bozhkov.
It is even rumored that their friendship started right from prison. Before November 10, Bozhkov also participated in a rather illegal gambling, which is evident from the documents found in his office. Part of his police file was found there.

At that time, Bulgaria was far ahead of Romania in every respect. We have imported cigarettes and jeans, while Ceausescu’s regime is starving its compatriots.
When the businessman took over Levski, Gigi gave one of his rare interviews for Bulgarian media. Simply because he hates journalists and hides from them like a devil from incense. There is even a cult case in which he threatens the journalist that when he finishes the interview, I will shoot him directly in the leg.

“We have to help my friend Vasil (Bozhkov – ba) to get Levski out of the problems it has run into in the last three or four years,” Giovanni told Tema Sport. – The goal is for Levski to be champions again. We will look for players who do not cost much. They will be young so that they can then bring money to the club. The most important thing is that Levski will no longer have players with contracts for 25,000-30,000 euros per month. Vasil is rich, but that doesn’t mean he has to waste his money. That’s what they did before him. He must beware of this.

I will be his bodyguard – I will not allow players to steal his money. The goal is to make them. I recommended for chief scout Bogdan Patrashku, who has been working for me for 3.5 years. I have friends in both Ludogorets and CSKA, including Grisha Ganchev, but my best friend is Vasil Bozhkov. I want to help him, “Becali admits.

Years ago, Becali helped Brazilian Junior Moraes come to CSKA, the Romanian businessman himself told the newspaper. And he talks about his friendship with Dimitar Borisov and Ivo Ivanov, the bosses of the Titan company, who then managed the club from the Bulgarian Army.
Only quality players will come to Levski, which will cost several million in 2-3 years. “Levski” does not need 5-6 tarikats aged 28-30 to take big salaries – Giovanni Becali ordered in the interview. – My cousin Gigi Becali has collected about 150 million euros from transfers to Steaua in ten years. Before he started earning, he invested 30-40 million. Now he no longer pours, he works with the earned money. This is what Vasil Bozhkov should do – for the club to earn enough in 3-4 years, and not to rely on his personal funds. Fans should be calm, but things will slowly become. As the Italians say, “He who walks slowly will go far,” Giovanni added in an interview.

According to rumors, it is around football that relations with Grisha Ganchev are strained.

At one point, a bunch of Romanians came to Litex, who then left quite quickly due to suspicions that they were not up to standard. His man was coach Mihai Stoykitsa, who brought goalkeeper Florin Prunia, defender Rakita and midfielder Eugen Trika. Of the three, only Trika made a real career in Bulgaria, after which he played for CSKA. Becali also brought to Lovech the injured striker Florin Bratu during the first stay of Lyuboslav Penev as a coach there.

CSKA fans remember how Giovanni appeared on
Pancharevo with its old Rolls-Royce in the time of Vasil Bozhkov. Giovanni is close to Bozhkov, and the Bulgarian has always called him Ivan. He speaks our language perfectly, as well as several others.

This makes it quite mobile in the football market.

Giovanni Becali was the second member of the family to go to prison after his cousin Gigi. His brother Victor was also sentenced. Giovanni spent 6 years and 4 months for tax crimes and money laundering for transfers from Dynamo.

Giovanni was born on June 10, 1952 in Galati. He earned his license as a football agent in 1989 together with Victor.

Gigi was born on June 25, 1958 in Braila, the capital of Bulgarian hashes.

He went to prison in May 2013 on the same charges as his cousin.

Unlike Giovanni Gigi, he has a very serious career. He was a Member of the European Parliament from June 2009 to December 2012 and of the Romanian Parliament from December 2012 until his sentencing. He got into a lot of scandals, and was even accused of homophobia several times. However, this does not hinder his career and many fans adore him.

In general, he also liked Bulgaria very much. He often visited
in elite hotels in Silistra, almost closing the targets when the boss of “Steaua” appeared.

It is interesting that as a child Gigi was an avid fan of the police “Dynamo”, which is equivalent to “Levski”, but then his fate connected him with “Steaua”, the brotherly team of CSKA.
Unlike “Steaua”, which remained a factor in football, after the withdrawal of Gigi “Dynamo” is going down. It is unclear at this time whether he will be able to obtain a license for the new season. But he will certainly rely again on the experienced swindler Ion Becali, also known as Giovanni.

Frames from the presidential election protest in Minsk

Central Bohemian officials took almost hundreds of thousands of bonuses. The region refuses to say what

In rain-soaked patch; The kitchen of the house in Matavoor was washed away

The moment a plane fell in the Russian Kaluga region … Video

The season is a failure: One after another the hotels in Albena are closing

Apple dispels the myth. The Oscar-winning director made a short film for him vertically

Earthquake in Africa; It scored 5.6 on the Richter scale

There are more tickets for the semifinal against Levski

Here’s why tilting airplane seats back is not recommended

It can take up to 12 months to refund our money...

Krejčíř’s villa: the value of the seat has fallen by hundreds...

Merkel: Euroleaders may not agree on a recovery fund

The US Senate has approved millions for faster nuclear tests